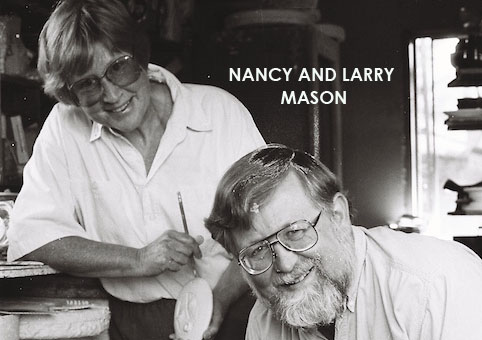 Memories from Nancy and Larry Mason: circa 1970’s In the mid 1970’s a group of potters would get together creating beauty and utility from a common bag of clay.

Add to that our love of chemistry and glazes, willingness to share all our recipes, plus the grand potlucks and you’ve got it all.  Then came the formation of Clayfolk!

Larry and I were in charge of finding a place to hold the sale for 9 or 10 years or more:  a store front or vacant space in a mall.  The Bee Barn, at the old site of the Jackson County Fairgrounds, was our “home” at Christmas for about 3 years.  Bee Barn came with running water and light.  No heat, as I recall!  Twice, on two successive years, there was such a dense fog, you couldn’t see 3 car lengths ahead.  We figured nobody would venture out on a night like this to buy a pot, but we were swamped with excited pottery enthusiasts who bought lots of pots!!  We were very much warmed by their devotion and support.  In those early days, we held the show on two successive weekends – setting up and tearing down each weekend!

In additional to Show site procurement, having a phone line put in as credit cards came into vogue and taping the floor in a manner that gave everyone an equal booth (and each year the number of potters expanded) were our jobs.  Then there was lighting – just like the big times – and so outlets and cords and more tape on the floor.  We drew names from a pot to see who could get which booth, then the names would be taped to the floor.  Without a point system, one of the children, usually Charlie Morgan or Kate Robinson, would be the person to draw the names.  That’s my recollection.

In the beginning, booths were a low tech affair – a few saw horses, or boxes stacked up, with boards across them.  And to really spiffy things up, a blanket or tie dye bedspread was flung across it all, giving a warm, homey touch.  Pots were wrapped in newspaper and packed into grocery bags, which we all contributed.  That was all…no baskets for costumers to gather gifts with.  Later, Leslie Lee and Dennis Meiners brought the holding table idea with them from Portland, plus the point system.

Finally, the job I had included clean up which meant scrapping the tape glue off the floor and at Poplar Square, I remember, it took me all day on my knees.  At that point, I suggested a special committee for clean up, bringing vacuums and brooms, etc. and nobody could leave ‘til all was packed and the “room” was restored to rights, as my mother would say.  That tradition is still followed today.

All this has now been streamlined and organized over the last 40 years and we’ve grown from a dozen in the tiny Bee Barn to what you see today – 70 booths and over 70 potters.

Having been in Clayfolk for 35 years we can say “it’s been a fantastic run and our faithful customers are the finest people with the most amazing and varied tastes.  God bless ‘em all.

Retired but cannot stay away!